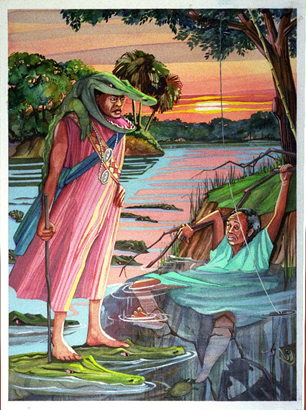 Zora Neale Hurston was born January 7, 1891. She grew up in Eatonville, Florida, and became an anthropologist, folklorist, and novelist. Hurston collected folktales from Florida, the West Indies, and Haiti. This watercolor painting by Kitty Petterson (ca. 1999-2000) is an illustration of a tale Hurston collected about a Voodoo priest called Uncle Monday, who was captured in Africa, endured slavery in South Carolina, and escaped to live among the Seminole in Florida. Uncle Monday could turn himself into an alligator at will. Here he gives a lesson to old lady Judy Bronson, who claimed her magic was as strong as his. Uncle Monday brought her to a swamp and set an alligator to guard her. As the darkness fell, Judy confessed that he had the greater magic. After this admission, the townspeople found her and took her home. (collection of the Museum of Florida History)