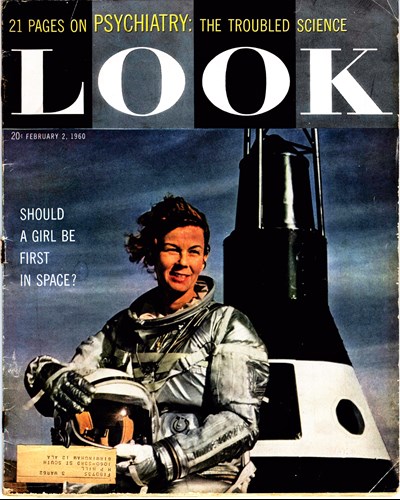 This February 2, 1960, issue of Look Magazine features famous woman aviator Betty Skelton in an early astronaut suit. Skelton was born in Pensacola, Florida, in 1926 and was a land-speed record holder, aerobatics pilot, and first woman to undergo the same physical and psychological tests as those given to the Mercury Seven astronauts. While Skelton never made it into space, she was known as the “The First Lady of Firsts”, and helped open doors for women in the field of aviation and aeronautics. Skelton’s love for airplanes came from her home’s proximity to Pensacola’s Naval Air Station. After taking her first flight at age twelve, she received her pilot’s license at age sixteen, and flew every chance she got. By the time she died in 2011, Skelton was inducted into eleven halls of fame and had seventeen aviation and automobile records. (Collection of the Museum of Florida History)