A Permanent Exhibit at the Museum of Florida History 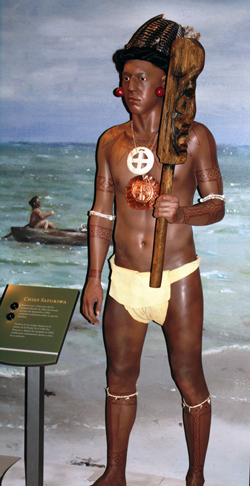 In 2013, Florida commemorated the 500th anniversary of the landing of Juan Ponce de León on Florida shores in 1513. This milestone event marked the beginning of the European, initially Spanish, and African presence in Florida and in the United States. The Museum of Florida History developed Forever Changed: La Florida, 1513–1821, a major permanent exhibit, as part of the statewide effort to highlight 500 years of Florida history. The Museum opened the first phase of the exhibit in March 2012 and completed the project in October 2015.

Forever Changed chronicles a dynamic period in Florida's history–from the meeting and interaction of vastly different native and European cultures to its adoption as a United States territory. It brings to life the cultures, perspectives, and material evidence of the many groups that forged the state's past and left lasting legacies.

At the time of the Spaniards' arrival, dozens of distinct groups of native people existed in Florida, but their way of life was impacted drastically as Spain established a foothold that lasted for nearly 300 years. During that time, the Spanish established missions, forts, and settlements. A brief British occupation, a second Spanish effort, and an increasing interest by the newly defined American states added further twists in Florida's colonial experience.

The story begins with the Native Americans who were here in 1513. Several hundred thousand to perhaps one million people lived in Florida. The portion of the exhibit called "Land of Many Cultures" highlights the diverse cultures of native groups including the Timucua, Apalachee, and Calusa Indians. Visitors learn that, although these native peoples shared important cultural traits, there were many differences as well. Visitors can view a recreated native dwelling in this portion of the exhibit. 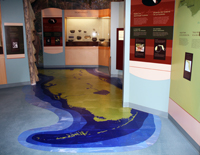 In "Spanish Exploration," visitors can walk on a dock and be part of a scene reminiscent of the loading of a ship traveling to La Florida. The pier leads to a reproduced portion of a Spanish ship, where visitors can learn about navigation and life at sea. The exhibit features a third section called "Meeting of the Cultures." Museum goers view life-size figures representing diverse people who experienced sixteenth-century Florida. Maps trace routes of the explorers, and artifacts lend evidence of sixteenth-century European presence in Florida.

The next section, "A Changing World," (1565–1763) examines Spain's efforts to establish and sustain a colony in La Florida with settlements, missions, and forts. Visitors can walk through a replica fort bastion representing the Castillo de San Marcos in St. Augustine and learn about the strongholds the Spaniards built to protect their fledgling colony. Visitors can step inside a recreated early Spanish colonist's home in St. Augustine and view a façade representing a late sixteenth-century town church. These elements give visitors a sense of place as they learn about the establishment of St. Augustine and other settlements, including Fort Mose, the first free black community in the U.S., and the mission system in Spanish Florida.

In 1763, Britain gained control of Florida. "A Shifting Economy" (1763–1783) examines Britain's attempts to make Florida profitable through the development of plantations and trade with the Native Americans. Visitors are sheltered by a live oak tree stretching over a mural of a trading scene between a group of Native Americans, a European trader, and Black interpreter. 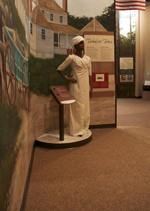 The next section, "Turbulent Times" (1783–1821) explores the Second Spanish Period after Spain resumed control of the colony in 1783. This was a time of instability and turmoil as Spain struggled to keep Florida and fend off American attempts to weaken its control. Ultimately, Spain could not hold onto Florida, and it became a United States territory in 1821.

The exhibit concludes with "Florida Becomes American," marking the transition from a colony of Spain to a U. S. territory and then state, connecting Florida's colonial experience to later periods of the Museum's permanent exhibits.

In addition to text panels, murals, recreated settings, life cast figures representing historical individuals, and three-dimensional objects and artifacts, the exhibit features many interactive and hands-on activities. These components assist visitors of all ages to better understand the colonial history of Florida.

A bibliography about Florida’s colonial period.