Though denied direct roles in combat, many American women served in the armed services during World War II. With slogans such as "Free a Man to Fight," the government encouraged women to enlist in order to allow more men to serve in combat.

In addition to traditional office jobs, women performed as mechanics, truck drivers, air traffic controllers, and in other challenging fields. Some 272,000 women, including many Floridians, joined the Women's Auxiliary Army Corps, later simply the Women's Army Corps, or WACs.

Women also served in similar organizations such as the Navy's WAVES (Women Accepted for Volunteer Emergency Service), the Coast Guard's SPARS (an acronym of the Coast Guard motto "Semper Paratus--Always Ready"), and in the Marine Corps. Many women served overseas, and a number died on active duty. Army and Navy nurses in particular were praised for their courage and dedication.

In addition to these organizations listed, the WASP, or Women Airforce Service Pilots, was a group of civilian pilots utilized by the Air Transport Command for ferrying aircraft and training duties. Female aviation pioneer Jacqueline Cochran, a native of the Florida panhandle who piloted her own plane before the war, was selected to organize the WASP. 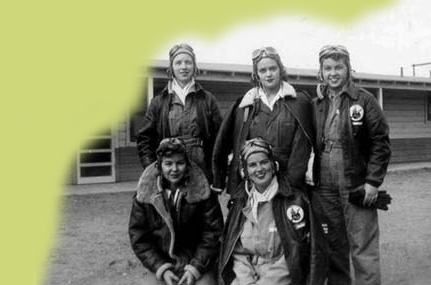 Women Airforce Service Pilots (WASPs) at an airbase in Texas
The large patch on their jackets is the "Fifinella" patch, designed by the Walt Disney Company.
(www.wingsacrossamerica.org and Deanie Bishop Parrish)