Introduction: Florida on Eve of War

Florida's population on the eve of World War II numbered just under two million, with Jacksonville, Miami, and Tampa comprising the state's largest cities. While two-thirds of the state's citizens lived in towns and small cities, much of Florida remained rural. Because of northern retirees and immigrants, Florida's population of older and foreign-born citizens was greater than that of neighboring states.

The collapse of the land boom of the mid-1920's, followed by the Depression of the 1930's, had hurt Florida's economic development. Still, by the late 1930's and early 1940's, Florida's warm climate, beaches, and recreational activities annually attracted several million tourists to the peninsula. Defense appropriations and New Deal initiatives also contributed to an economic revival that had taken hold by 1940. Military preparations began long before the U.S. officially entered the war.

Training bases were established or expanded in the state, particularly after the passage of the Selective Service Act in 1940 (the draft) and the mobilization of the Florida National Guard. In addition, the training of American and Allied pilots had also begun in Florida prior to December 1941.

America's entry into World War II set in motion forces that would dramatically change both Florida and the nation as a whole. The modernization of Florida dates from the rapid changes and technological advances which occurred during the Second World War. Through the use of photographs and documentary materials, these pages tell the story of Florida's role in World War II and of the men, women and children who helped win the war. 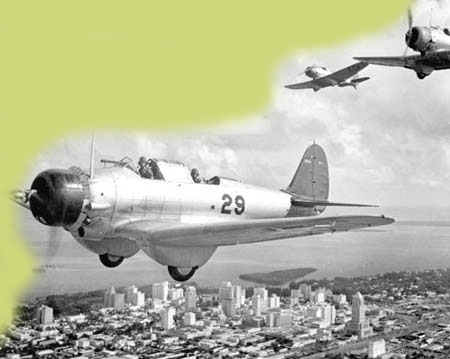