About the Knott House 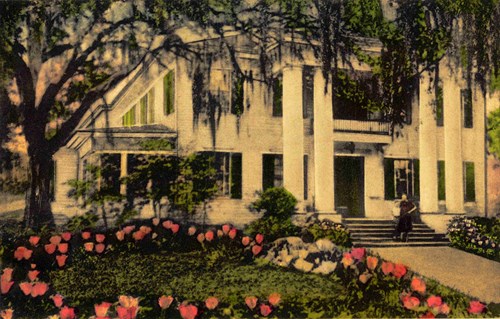 The house currently known as the Knott House was constructed in 1843, probably by George Proctor, a free Black builder. Attorney Thomas Hagner and his bride Catherine Gamble became the home's first residents the following year.

Immediately after the Civil War ended, Union Brigadier General Edward M. McCook used the house as his temporary headquarters when he occupied Tallahassee. On May 20, 1865, McCook declared the Emancipation Proclamation to be in effect, thereby announcing freedom for all enslaved persons in the greater Tallahassee region. In 1883, a prominent local physician, Dr. George Betton, bought the house where he maintained an office.

In 1928, the Knott family acquired the house and lived here until 1985. William Knott served the State of Florida for more than forty years as tax auditor, comptroller, and state treasurer. His wife Luella was a musician, a poet, and an advocate for social causes. Their home became known as "The House That Rhymes" because she adorned its Victorian-era furnishings with her poems that blended history and moral lessons with charm and wit. Mrs. Knott preferred the Victorian style that was popular when she was growing up rather than the styles popular at the time she furnished the house. Most of the furniture on display is original to the house. Historic photos guided arrangement of the furnishings, and the rooms appear much as when William and Luella Knott lived here.

Mr. Knott ran for governor in 1916, but lost in a disputed election. The family left Tallahassee, but in 1927, Governor John Martin offered Mr. Knott the position of state auditor, and the Knotts returned to the capital city. Mrs. Knott wanted people to know her husband was an important man and decorated and redesigned the house to project power and success. She altered the appearance of the front of the house, adding the grand columns it features today, and making other renovations.

With the death of the Knotts' son Charlie in 1985, the Historic Tallahassee Preservation Board became the beneficiary, and after extensive renovations, the Knott House Museum opened
to the public in 1992. Its administration was transferred to the Museum of Florida History in 1997. Today the Knott House is listed on the National Register of Historic Places as part of the
Park Avenue Historic District.